In September a group of U3A members journeyed to Germany as part of a Link & Learn exercise. This is a summary of their experience by Edna Butler.

“Link and Learn” was established by members of Seaham Harbour U3A. They invited our members from Seaham & District U3A to join them in a venture to look at and compare all aspects of our British U3A s with those established in Germany.

Our policy of being in a U3A was to learn and teach ourselves in chosen subjects or interest groups while the German U3As concentrated more on the educational aspects rather that the social side.

The leader of the Link & Learn group was Sandra Wilkinson from Seaham Harbour U3A who made the initial contact with our German counter parts. She arranged a meeting at Stuttgart University, and the councils – both here at Seaham Town Hall and with Andrea Lohle and the Burgermeister in Gerlingen.

The final group of 8 who decided to make the trip to Germany were:

Seaham Harbour U3A had won £250 from a competition about ideas for further educating people and their U3A matched this, giving them another £250. They then raised a further £480 from fund raising events to fund their venture.

The group travelled to Manchester and then flew to Stuttgart where they stayed in the Mercure Hotel. After settling in, Jean Watson contacted Rita, a German friend of hers who wanted to meet the group. Rita came to the hotel and then took the group to an eating place she knew. Everyone enjoyed the meal, beer and cocktails – in a huge glass of delightful flavours and concoctions. We then visited the library, a very impressive 8 storey building, open until 10pm before returning to the hotel.

A visit to Stuttgart University had been arranged for the group and some others from Gerlingen to meet Professor Roland Schone who had very kindly booked a room at the university for everyone . Professor Schone gave a presentation on the bringing together of the U3A age group and marrying them with the youth element which he was passionate about “The elders” giving their experience of life and previous learning, and the “youth” teaching their modern methods and new ideas to the exercise.

Then Sandra Wilkinson gave her presentation explaining how we ran our meetings, groups etc and explained that she was also keen to develop knowledge and experience within the two age groups.

Also Malcolm Wilkinson explained more about our group aspects of our meetings .

Finally the University itself, did their presentation on their learning policies and aspirations on bringing together the two age groups.

After the presentations we were given handouts and then offered refreshments of tea, coffee and delicious pretzels by the very friendly University staff.

A great day for exchanging our ideas and aspirations for all attending.

We had walked from our hotel with Erica “our appointed guide” for the day who is also a member of the twinning group . She had taken us on a walk to the university from our Hotel showing us all the sights en route . After the visit to the university we walked back into the centre of Stuttgart and ended the day in a cafe outside of a beautifully stocked market with mouth- watering displays of food, fruit and vegetables, and ended up by having a leisurely meal in the square there. On the way back to the hotel, Rita took us through the “Bean” area which had been a food handout place for down and outs at one time and pointed out more places of interest. 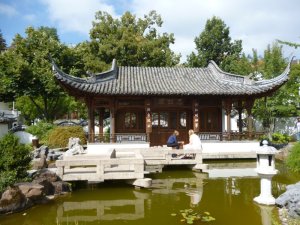 The train/tram station was only 5 minutes walk from the hotel. We used the Ubahn (which is similar to our metro) to travel to Gerlingen. Our day had been planned for us by Andrea who is in charge of the town twinning project between Seaham and Gerlingen. We arrived in the morning and she met us and had arranged a guide to show us around Gerlingen. First port of call was the old Fire Station – renovated to house the sporting activities etc. The old “Firemans Pole” area had been cleverly camouflaged with items and displays placed on different levels. After the visit we were taken to the old Town Hall. This is now a very cosy L shaped room where the elderly residents enjoyed their get- togethers and assemble for their walks etc. Verna, who is an elder and a former Bergermeister, welcomed us and explained its history and present usage.

We then went to the present day town hall – shown around and given lunch in the staff area in the garden. We had a traditional German dish and drinks. After lunch we were taken to a modern Family Centre on the outskirts of Gerlingen. All the rooms catered for the different needs of the children – books, workshops, sleep area and TINY toilets. The principal and assistant showed us around and then we met a group of elderly people who use the centre to meet up, socialise, play games and do crafts. They welcomed us and provided refreshments of tea, coffee and cakes. We did quizzes and learned how to make a flower table decoration. Following the really enjoyable afternoon, we walked to the supermarket to buy the final ingredients to make cup cakes and Pimms which we would be selling on a stall at the Gerlingen Street Festival.

(We had previously been given the keys to the Town Hall so we could come and go as we pleased in order to prepare things for the stall.) Andrea asked if we would like to join her and her friends/work associates for a meal that evening – we all said yes. We were taken to a converted track- side eating place and had a delicious meal and drinks. Much to our surprise, the Bergermeister had organised for it to be a complimentary meal. We were absolutely delighted with the hospitality given to our group. One of the girls was allocated to see us to our train and accompanied us part of the way. We explained about the U3A and the Red Hatters poem which she directly downloaded and read it out to all of the passengers in the carriage – much to their amusement.

The Seaham Twinning contingent arrived yesterday and we were invited to join them for the official welcome from the Bergermeister. Refreshments and goody bags were provided for us all. We were also invited to go on the outing arranged for them to a picturesque village and the Ritter Sport chocolate factory where we were told how they make the chocolate and also included an art exhibition. This enjoyable free outing arranged by the council was concluded with complimentary afternoon tea/coffee/and a delicious huge cake or portion of cake. Photographs of the group were then taken outside.

Our evening was spent partially preparing fruit for the Pimms and baking 212 cup cakes for the next day at the festival. Our group of 8 assembled in the sports centre kitchen where 2 batches of butter/sugar/flour were mixed in a huge bowl with the help of a friend, Steve, on the electric whisk. The paper cups were laid out and the mixture spooned in when at the right consistency and baked in trays in the oven. The second batch was mixed as the first by our own little factory everyone pitching in to help.

This was an early morning start for Gerlingen! Jean Mullen/Pam and Edna went to the kitchen in the Town Hall to ice the cup cakes while the others went to decorate the stall and make the Pimms. Huge bowls were needed again to mix butter and icing sugar plus a little milk if needed. The completed cup cakes were stored in fridges at the Town Hall and on the stall. Jobs completed we have lunch and the ‘women’ Red Hatters manned the stall- complete with purple dresses or tops and red hats. This caused quite a stir and both the ladies and the stall got many words of praise. We had access to the Town Hall with refreshments freely available and we were also given vouchers to the value of 20 euros to spend (as did the Seaham exchange visitors) at the festival. The Bergermeiser led the opening ceremony and welcomed ALL the twinning guests – Gerlingen is twinned with 3 countries. The town band played and marched to head the procession to the square with some of the crowd marching with them. Tradition has it that the Bergermeiser has to knock out the bung from the beer keg in as few a strokes as possible – he did it in 2. Anyone nearby with a glass could have it filled with beer for free. There was also a hospitality tent with food and drinks for the twinners – we did not partake but were more than welcome to do so. The atmosphere was great. Veron, Peter and Edna kept the stocks replenished on the stall by transporting cakes from the Town Hall fridge to the stall fridge. Everyone who came by stopped and chattered and bought the produce. We also gave “Seaham” candy rock to the children. Erica was a great help hauling the punters in persuading them to buy. At the end of the day we had made 160 euros on sales. A good day had by all… 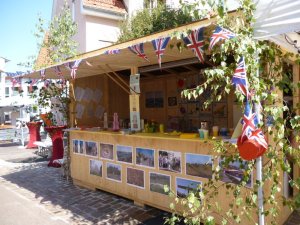 Malcom, Veron and Peter returned to Gerlingen to man the stall for the second day while the other 5 in our group went to Ludwigsburg for the day. All of the money taken on our stall on the second day was donated to a German charity. The takings from the first day were kept to help cover some of the costs incurred for the ingredients.

The group that went to Ludwigsburg saw a 19th century “Italian like” festival. Lots of the locals were dressed in crinolines, masks and finery and walked in the square for photo shots. It was really funny to see the people emerging from the train stations all dressed up in costumes and to walk through the Streets to the square where it was held. The activities were all in this square with blocked entrances (11 euros to enter). There were stalls to purchase goods, food, refreshments and then costumes, masks, hats, feathers – what a wonderful sight. Entertainers preformed in the street and on stages that had been erected here and there. There were tumblers, dancers, stilt walkers and a girl dancing on a huge red ball with a huge puppet in attendance.

There was also a palace and gardens to visit at 8.50 euros to enter. We did not have time to go into the palace- only the gardens. It was like Versailles. Gardens were laid out beautifully – no waste land. There were pumpkins all over, barrel organ and monkey, elephant, rabbit in a hat, tumblers and horses. We sampled pumpkin ice cream with pumpkin seeds sprinkled on the top . Delicious !! In the evening everything was lit up in the square with stilt walkers dressed as illuminated moths performing to the sound of a lady singing opera. It was a beautiful sight. We had a meal and stayed to watch the fireworks before heading back to the hotel. 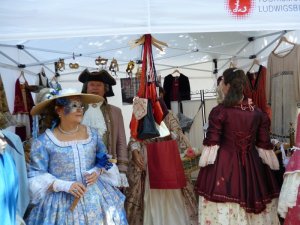 Malcolm took Peter, Veron and Edna to the big square in Stuttgart. There was a new palace and an old palace with cafes all around the square. We had a last drink in the square before heading back to the hotel and then the airport.

It was a wonderful adventure and a great experience enjoyed by all.